Door: Mike Myatt, Leadership advisor to CEOs & Boards, en auteur van Leadership Matters, gepubliceerd op Forbes.com Believe it or not, there is a downside to anything labeled best practices. Even though I will from time-to-time slip and refer to something as best practices, I am attempting to extricate that phrase from my vocabulary. I have actually come to cringe […] 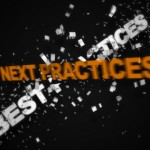 Believe it or not, there is a downside to anything labeled best practices. Even though I will from time-to-time slip and refer to something as best practices, I am attempting to extricate that phrase from my vocabulary. I have actually come to cringe every time I hear someone use the phrase in an authoritarian manner as a justification for the position they happen to be evangelizing. One of the most common reasons for pursuing best practices in a given area is to avoid having to “reinvent the wheel.” Think about it like this – if nobody ever reinvented the wheel, we’d still be riding around on wooden rims. One of the most difficult areas for executives to wrap their mind around is how to unlearn legacy based thinking. Maintenance doesn’t lead you forward – creation does. In today’s column I’ll ask you to consider my arguments for disregarding the myth of best practices.

Let me begin with a bold statement that I’m sure will unleash the wrath of many: “There is no such thing as best practices.” The reality is best practices are nothing more than disparate groups of methodologies, processes, rules, concepts and theories that have had success in certain areas, and because of those successes, have been deemed as universal truths able to be applied anywhere and everywhere. Just because someone says something doesn’t mean it’s true. Moreover, just because “Company A” had success with a certain initiative doesn’t mean that “Company B” can plug-and-play the same process and expect the same outcome. There is always room for new thinking and innovation, or at least there should be.

Let’s use an example of a common problem that most businesses face at some point in their lifecycle (if not at multiple points), which is needing to implement a certain application or toolset to automate an existing manual process. Okay, my question is this: What constitutes best practices in this situation? Does the company purchase an off-the-shelf solution, utilize a ASP or cloud-based solution, or embark upon developing a custom application? Moreover, if they decide to develop the application should this be done internally with existing staff, or outsourced? And if outsourced, will it be done domestically or offshore, and who will manage the process? Oh, and what about development methodology? I could go on ad-nauseum with this line of thinking, but I’m sure you get the point by now. The reality is you can find someone who will tell you that anyone of the options mentioned above constitutes best practices, so who is right and who is wrong?

To be clear, I’m not recommending a blatant disregard for existing methodologies, but rather a very critical eye as to whether or not they are appropriate beyond the fact they’re already in use. I’m a firm believer in challenging the status quo (especially the status quo surrounding best practices) usually leads to very fertile ground. It has been my experience that whenever methodologies become productized, objectivity is removed from the equation. Whenever you are being pitched a product as a solution, I suggest you exercise caution. Business is fluid, dynamic, and ever-evolving, which means static advice is at best short lived, but more often is simply incongruous with the very nature of business itself. Don’t allow someone to cram your needs into their canned sets of rules and processes, rather find someone who will create the right solution in response to meeting your specific needs.

My experience has been consistent over the years – whenever a common aspect of business turns into a “practice area” trouble is on the horizon. Before you know it the herd mentality of the legions of politically correct consultants and advisers use said practice area as a platform to be evangelized. When this happens, the necessity of common sense and the reality of what actually works often times gets thrown out the window as a trade-off for promotional gain. It is precisely the dispensing of one-size fits all advice that has allowed the ranks of consultants to swell to historical proportions. After all, if you can apply someone else’s theory in a vacuum it lowers the barrier to entry doesn’t it? Labeling something as best practices is not a substitute for wisdom, discernment, discretion, subject matter expertise, intellect, creativity or any of the other qualities I value in an advisor.

Popular business axioms and management theories are thrown around in such cavalier fashion these days that they can actually result in flawed decisioning. It is for precisely this reason that I believe too much common management wisdom is not wise at all, but instead flawed knowledge based on a misunderstanding or misapplication of “best practices” that often constitutes poor, incomplete or outright obsolete thinking.

Several years ago I began using the term next practices in an effort to focus people forward in their thinking. Why would you want to do business in the same fashion as your competitors? Don’t utilize your competition’s practices, but rather innovate around them and improve upon them to create an advantage that can be leveraged in the market. Be disruptive in your approach and don’t fall into the trap of doing something in a particular fashion just because others do it that way – think “next” practices not best practices. Here’s the thing – best practices maintain the status quo and next practices shatter it.

Bottom line – just because a professor says it’s so, a consultant recommends it, a book has been written on it, or a product has been developed for it, doesn’t mean that whatever “it” is constitutes the right option for you. I have personally witnessed companies that embarked upon an enterprise-wide initiative because they were sold on “best practices” and after two years into a seven-figure implementation without any meaningful benefit realized purchasing a product as a solution absolutely did not constitute best practices. Smart leaders don’t play catch-up – they play get ahead and stay ahead.